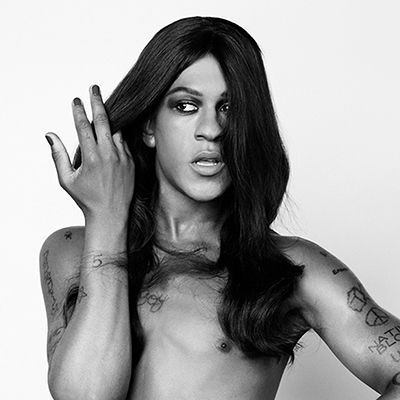 Mykki is considered one of the most intruguing icons of NYC underground transgendered hip-hop scene. He grew up between California and North Carolina. After he moved to New York City, he began to perform crushing industrial rock under the name No Fear, and glamorous, ghetto-fabulous riot grrrl rap under the name Mykki Blanco. He debuted as Mykki Blanco in 2012 with tracks like “Gay Dog” and “Join My Militia (Nas Gave Me a Perm)” and joined Death Grips on tour. May 2014 saw the release of the Spring / Summer 2014 EP, followed by the notable mixtape “Gay Dog Food in October” featuring a spoken word track with Kathleen Hanna, and contributions from Cities Aviv, Cakes Da Killa. He made an appearance in Basement Jaxx’s album Junto. His debut LP “Mykki” is outon September 16 via !K7.

Kirsten Azan, baptized Bambii, is inarguably one of the fastest rising and well-respected DJs in Canada. She’s opened for LE1F, Big Freedia, Machine Drum, Nguzungu and recently toured with Mykki Blanco. She recently played Wayhome, TIME, FORMS Festival and Piknic Electronik while her event series JERK has been at capacity since its inception. She is part of a new generation of artists pushing back on the notion of a single genre or scene; whether spinning at an afterhours, club, D.I.Y. venue, or art opening, her dance-floors are charged with sets that seamlessly unite electronic, hip-hop, house, and global sounds. She possesses a rare combination of musical vernacular coupled with raw creative instinct, and is adamant about creating inclusive spaces. Her work and words have been quoted in publications such as Complex, Thump, NOW and The FADER.